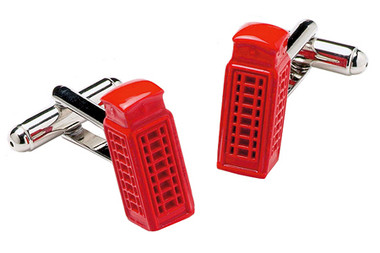 A fantastic gift for any anglophile, or just someone who loves the iconic British Red phone box.

In this day of mobile phones it may seem hard to remember that we haven't always had communications so instantly available.
Our red telephone box cufflinks are a reminder of this traditional British landmark.

So as well as looking great - you'll be wearing a repica of one of the top design icons with our red phone box cufflinks!

Come in a snazzy storage and presentation box.

Back to Top
Each category shows a sub-set of our range (e.g. "Novelty" contains about 25% of our cufflinks) please check other categories and/or use the site search to sample the
full range - or email [email protected] with some details of your intended recipient (hobbies/work/interests/location etc) if you'd like us to give some personalised recommendations.
Information:
Delivery | Payment  | Privacy